It was only a matter of time before I dived headlong down the Tina Givens rabbit hole. I started long ago with the Tiltons (slightly quirky), then progressed to Oska rip-offs (quirky and loose) and have now advanced to TG (quirky, very loose and extreme). I have summarily decided that the rest of this year will be the year for making slightly unusual and slightly weird clothes. I mean why not? I already have jeans and Chanel jackets, pencil skirts and frocks, so what’s missing from my wardrobe? The slightly weird and unexpected.

In order to ease myself into the TG aesthetic, the Plinka pants were downloaded, tiled and taped because they’re free. During a recent fabric clear-out I uncovered 4m of dark navy stuff. I have no idea what this fabric was originally purchased for, where it came from or what’s in it; that’s enough to tell you that it is definitely not made from natural fibres. I’ve had this stuff for so long that it now falls into the category of ‘free’.

TG patterns are almost free-form: no fitting required which allows for a certain freedom in cutting and sewing but I would strongly advise that you cut at least a size smaller than you need in order to avoid being overwhelmed by swathes of fabric. I regard myself as a UK 14 and always cut a Vogue (US) 14 but I make alterations as I sew. With TG I happily cut out a Small. 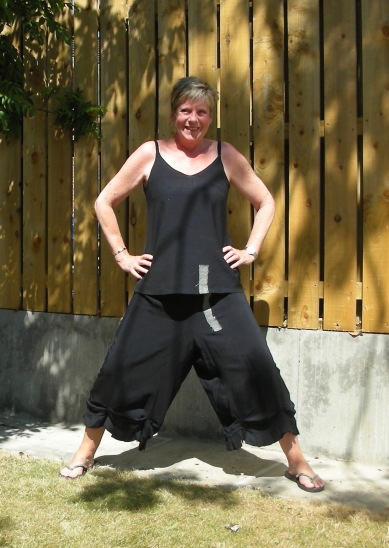 Plinka pants are essentially bloomers (take note Demented Fairy) that are perfectly acceptable to be worn on their own. Elasticated waist, patch pockets, comfortably loose with interesting details at the hem. Taking my time, I contently pressed the navy stuff into pleats, made binding, hem pleats, pockets and, out the other side,  a matching Ogden cami. Now I have an “outfit”……

I also uncovered a little bit of navy/ivory linen that became another Ogden. This time I utilised all the leftovers and cut them into strips with pinking shears, sewn along the centre line only and left to fray at will.

Pinking shears are the most recent tool added to my sewing arsenal. These were a Christmas gift from my son and they have been indispensable.

Generally overlooked nowadays because of overlockers/sergers but these amazing scissors have been used in haute couture since its inception to reduce bulk in seams and they prevent fraying in the simplest way. I don’t cut out a pattern with them but use them for seam finishing under a lining, trimming inside collars and cuffs, neatening the edges of patch pockets and sometimes using them for effect.

I totally love these!  I hope I wear them and carry them off with the confidence and aplomb that they deserve. They do have that dropped crotch of which I am not generally a fan but somehow it works with these.

Went to a gin tasting a few weeks’ ago, even though I don’t like gin, but doing my best to support the local Belfast hospitality industry – I’m such a martyr to the cause……. and I didn’t have to think about what to wear………..