All this fabric was bought in July and is only being sewn up now, but then again it was always intended for this autumn/winter’s wardrobe, so I suppose it’s timely. For once there was a little bit of forward planning that might have actually worked out. I’ve been busy doing other things for a few weeks but I’m back home now and – sewing! 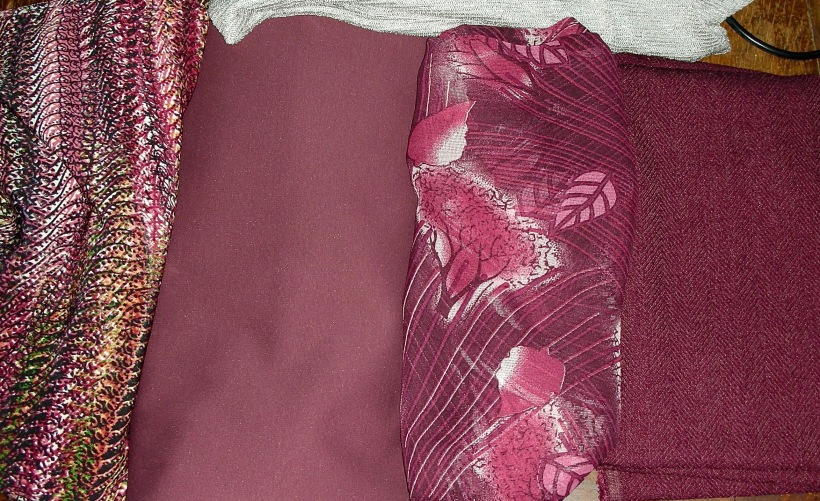 The two fabrics on the right are from Minerva and generously gifted from my very dear friend Caroline on the day we went shopping with Mags. The far left fabric is from Fabworks and the burgundy ponte is a long forgotten purchase from somewhere, just patiently waiting for its time. 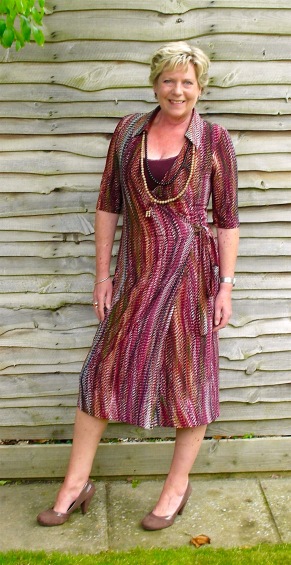 Eventually I actually got started on the A/W ’16 wardrobe, though it has been late because of the mild weather here and a personal reluctance to admit that summer has left.

One pair of cropped trousers – cropped because I bought only 1 metre planned for a pencil skirt and in real life I realised that trousers would be more practicable. (Fabric on the far right). 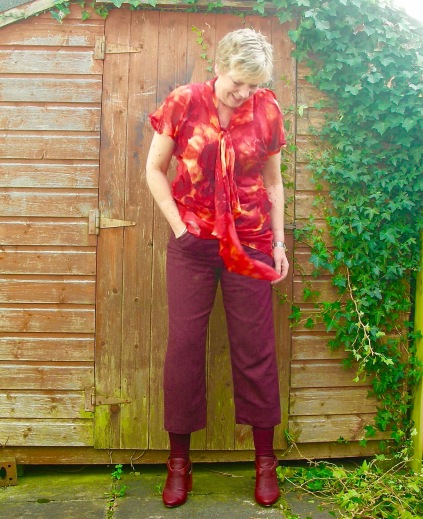 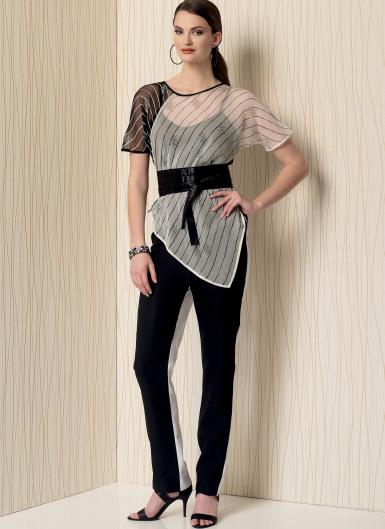 I added front welt pockets and, obviously, shortened the length to suit the available fabric rather than style. They are lined, elasticated waisted and although made from polyester they look like  tweed and hence there is no wrinkling or shrinking, or wet-dog smell when wet with rain. I’d just like to point out the relative width difference between the pattern envelope and my actual trousers………

Worn firstly with some delicious silk from Joel & Sons (bought in a sale), and the fabric design and colour reminds me of autumn leaves, firesides and fireworks. This top was made in a very haphazard way – using a basic block and then sewing on the leftovers as a sailor’s neck and front tie and asymmetrical hip edges: just trying to use up every last scrap of this relatively expensive silk. 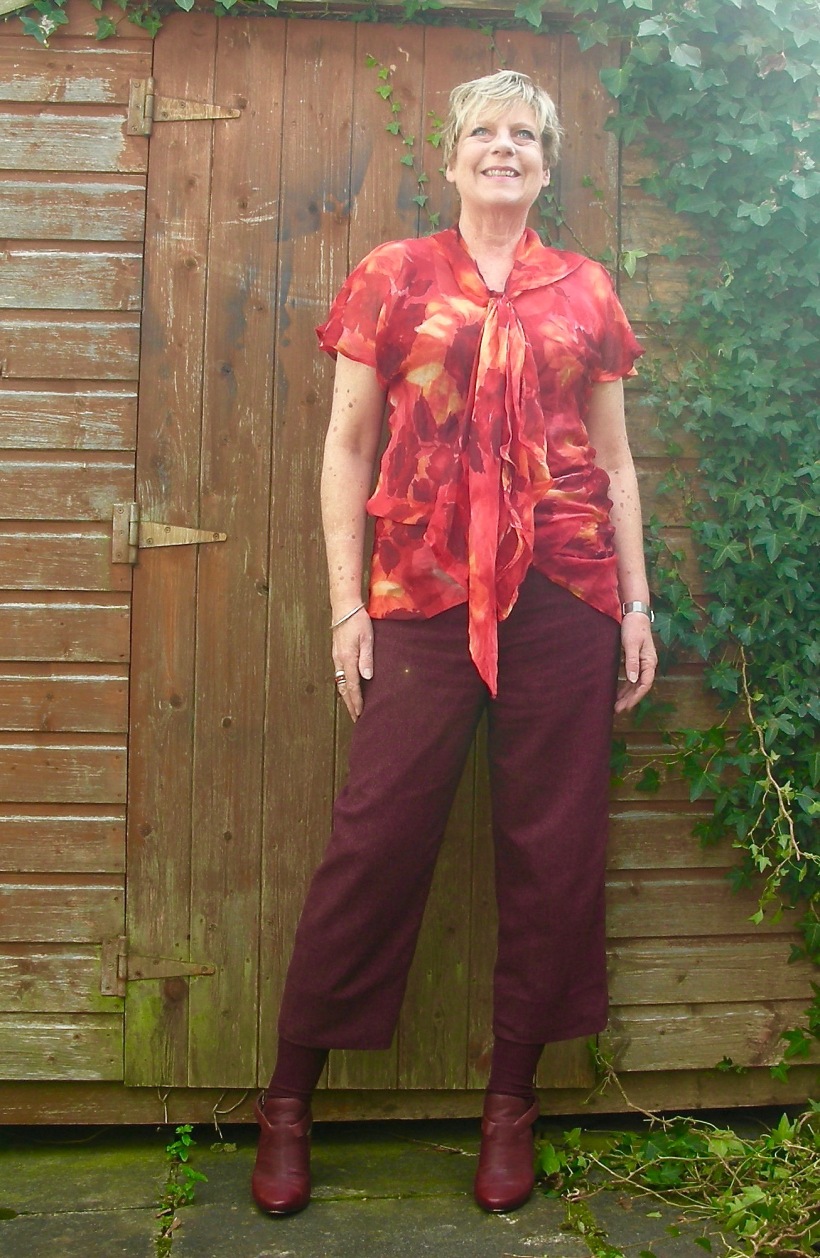 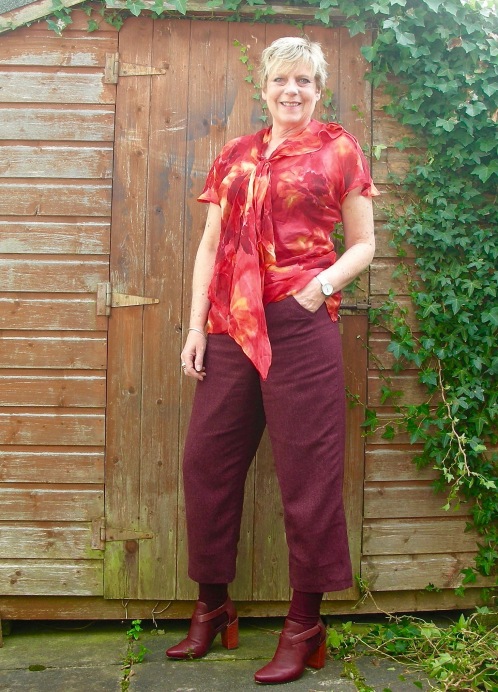 Next, the trousers are paired with a fine mesh polyprint (second from right) and made up in McCalls 7247. This pattern is intended for jersey/stretch but I took a chance and it worked.

View D, at the bottom is the one I made.

While I added bands to the neck and cuffs I left them with raw edges so that they fray. Heck, un-hemmed edges are all over Vogue magazine; if it’s good enough for them, it’s certainly good enough for me.

If I wear it with enough panache, then it’s ‘designer’. 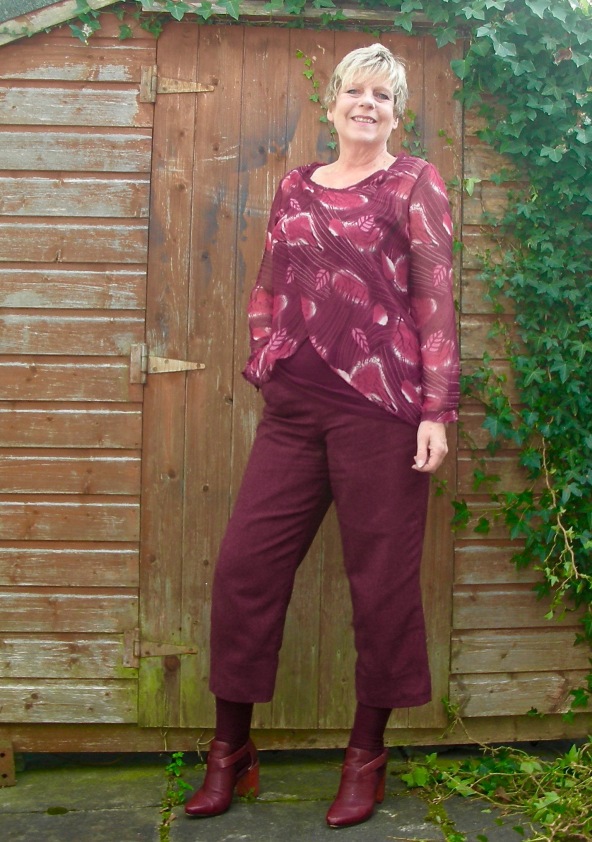 I do need to wear my very reliable, RTW and cheap  burgundy cotton sleeveless T-shirt underneath but, heck, it’s winter and it’s going to get cold and your Mother always told you never to leave the house without clean pants (knickers), a handkerchief and a vest, just in case you were in an accident. Hopefully, I’m safe. 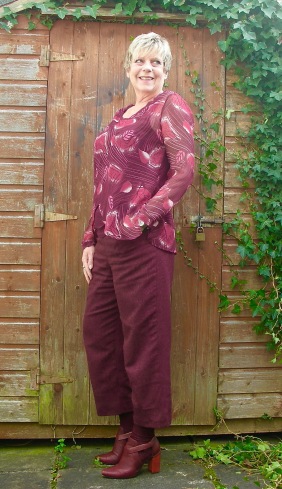 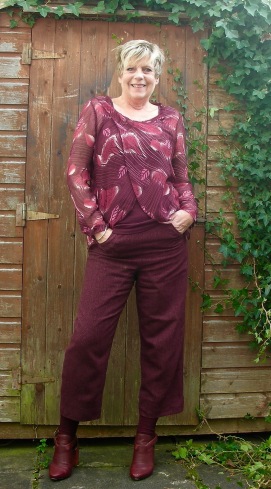 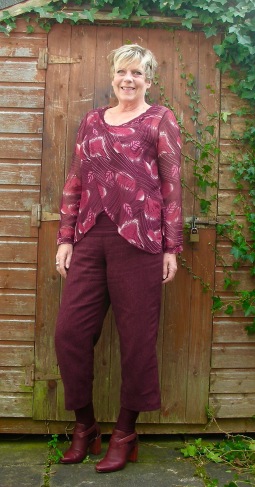 Then I added to the burgundy stash and purchased some jersey marl that I think is from MyFabrics but I’ve fallen out with them recently, so they are absolutely last-resort now. This was transformed into a Vogue 9193, a Marcy Tilton tunic. 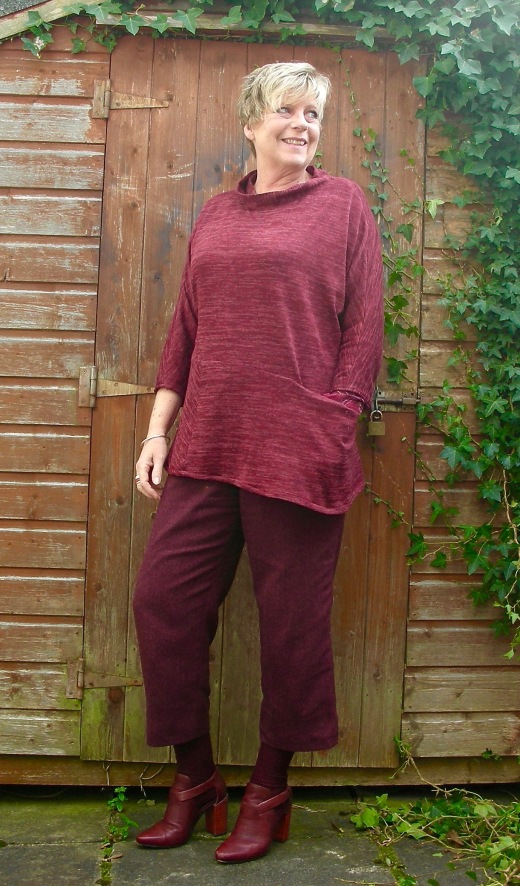 Trying to replicate the Tilton sisters, I tried to do a bit of artistic-stuff around the neck  with a double layer loose neck edge, which I’m not quite convinced worked out but then again this is not intended as a spectacular designer top, rather as a normal, everyday pull-on type of top. With the leftovers I sewed up a scarf-like thing, basically a couple of rectangles sewn into a hoop (worn on the right pic) and looks like a cowl neck. 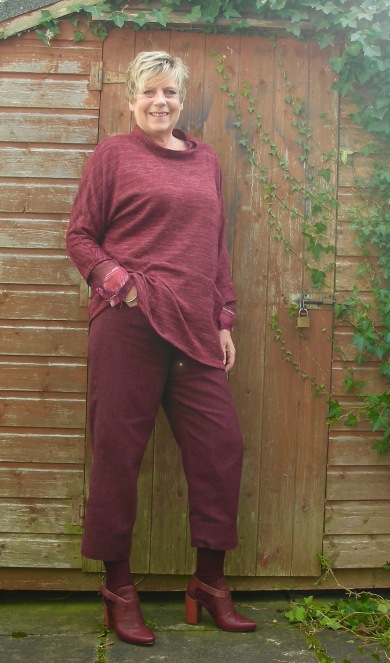 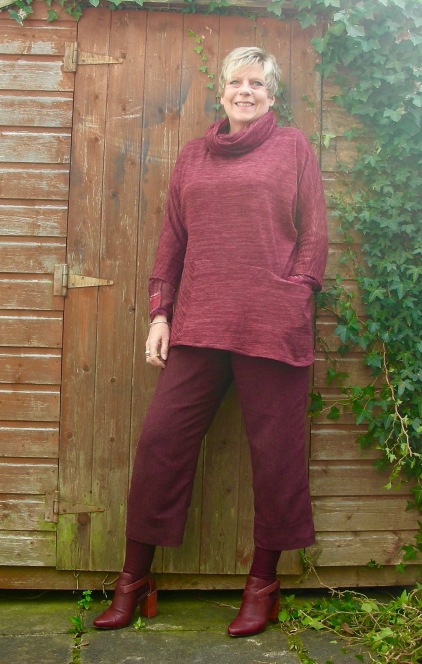 So, one pair of trousers, three tops, a dress and a bit of ponte left to sew. Those of your follow the Vivienne Files will be capable of calculating how many outfits that will make. Personally I just reach into the wardrobe and hope for the best and not an orphan in sight! 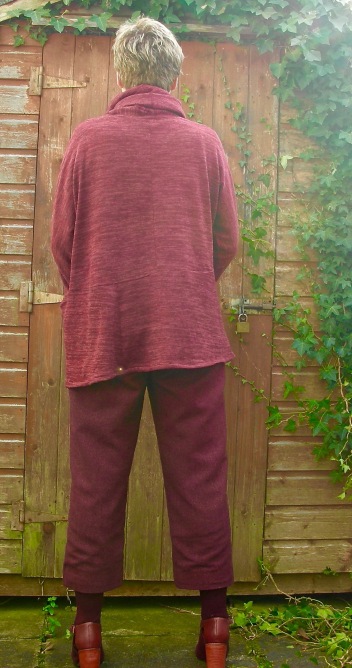